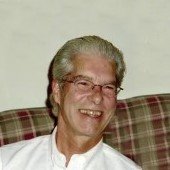 Ronald Gilbert Desaulnier passed away on Wednesday, June 23, 2021, at home with his loving family at his side. He was born on April 8, 1948, the son of William and Alice (Hall) Desaulnier.

Ron grew up in Woodstock and was a graduate of Woodstock Academy, later attending QVCC. He was a 20 year Veteran of the Connecticut Army National Guard, retiring with a rank of Master Sergeant, and worked for many years at Colt’s Plastics. At the time of his death he was working at Artube of Great Neck, New York, a place he has enjoyed working for more than 20 years.

A lifelong Boston Red Sox fan, he also enjoyed watching the UCONN Women’s Basketball team as well as his favorite football team the Dallas Cowboys.  His family was important to him and he held many family reunions at his home in Thompson. He was often heard saying “I’m going to New Jersey” where he spent time with his son Michael and his family. He was also fortunate to have had many wonderful friends he enjoyed spending time with and “tinkering” with cars and cutting wood with his brothers.

Ron is survived by his son Michael, daughter-in-law Leanne, and granddaughters Charlotte and Chloe of New Jersey. He also leaves his two brothers Dennis and his wife Pamela of Eastford, David and his wife Pati of Putnam; two sisters Beverly Spink and her husband Paul of Brooklyn and Joanne Woodfall and her husband Gordon of Amesbury, MA.; and 10 nieces and nephews. He was predeceased by his parents, his son Mark, and his significant other Jean Pappas.

Ron’s family will receive relatives and friends Sunday, June 27, 2021 from 2:00 to 4:00 PM at Smith and Walker Funeral Home, 148 Grove Street, Putnam, CT. A Mass of Christian Burial will be Monday, June 28, 2021 at 11:00 AM at Most Holy Trinity Church, 568 Pomfret Street, Pomfret, CT. Family and friends will gather at the Funeral Home at 9:30 AM. Burial will follow at St. Mary Cemetery Putnam, CT. Donations to the Danielson Veterans Coffeehouse, ATTN Charlie Milewski, PO Box 3, Danielson, CT 06239. Share a memory at www.smithandwalkerfh.com

Share Your Memory of
Ronald
Upload Your Memory View All Memories
Be the first to upload a memory!